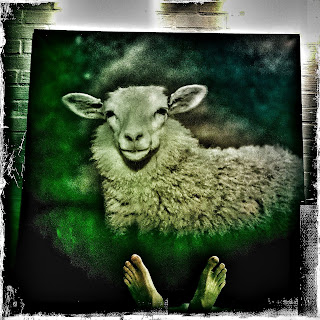 So since the Sauna Open Air was cancelled this year, we had a show at the Pakkahuone as part of the Lohtulöylyt-thing. Other bands on the bill were Evile and AHOLA. We left Kemi the evening before and arrived to Tampere around 0600 in the morning, went for breakfast at the hotel and then to bed. I woke up in the afternoon to a call from our drumtech Masi.

So, as some of you already know, we use a computer to play some backing tracks (pre-recorded stuff) during some of our songs, for example the orchestral things in The Last Amazing Grays among other things. Today we decided to play Cinderblox for the first time and since none of us can play the banjo, it's also played by the computer. Well, yours truly forgot the damn thing in Kemi, some 600km away with less than 8 hours to go before we're supposed to hit the stage. After quickly checking available options, all we could do is pick up the phone and try to find someone to drive down to Tampere with the thing, immediately. We put the word out and through our friend and bar-hero Jarkko we got a hold of OC who without hesitation jumped in his car, picked up the computer at my place and put the pedal to the metal :-) Some hours later and not a moment too soon (this is why we had to delay the start of the show a bit) we got our banjo and orchestra and hit it. A big thanks for the heroic effort to OC, you rock dude !!!

The show itself was probably the greatest so far this summer, playing inside in a club with an entusiastic crowd is more fun for me than the huge outdoor stages. It's also a matter of getting used to it but right now I really miss the sweaty clubs. Be that as it may, as said we played Cinderblox for the first time and also premiered Alone in Heaven, so there was a lot of new things for us as well. At the moment this is pretty much the songs that we will go with this summer......probably....and then for the fall shows we change it up a bit again. I think we might even bring back the acoustic thing, that would be great wouldn't it ? 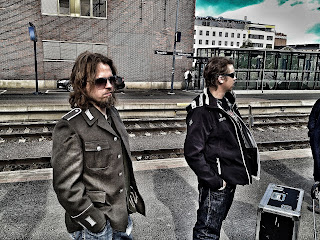 At the moment I'm on the train with Tommy and he's noodeling with some pictures of the trip...we'll be home in about 6 hours. The next shows will be Seerock in Austria and Tuska in Helsinki in a couple of weeks. Until then....

About the pics (taken by Tommy ): The trainstation pic is actually a showing of what we do the most when on tour, which is waiting....at the moment (having done this for 10 years) I'm getting pretty good at it. The Sheep from Hell was a painting that was in every room of the hotel, which for obvious reasons kinda freaked us out, seriously what the fuck is the deal with those.....count the sheep ? but there's only one....COUNT IT !!!
Lähettänyt Hank klo 7.08