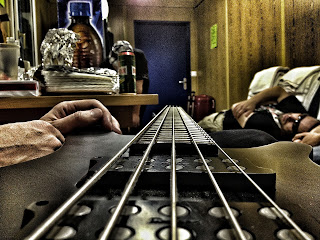 The first day on this weekend's adventure was quite uneventful but don't worry, we'll get there. Anyways
in the evening we flew to Helsinki and a night at the airport hotel. A relaxed dinner with the guys upon arrival to the hotel, set the tone for the evening. Being that it's already been a couple of weeks since our last show, we did some catching up about what we all been up to during the time off. A few beers later it's nighty
night....

Wake up at just before 0700, so not that bad at all. A killer breakfast, get all the dudes lined up and off-we-go to the check-in and onto the flight to Budapest. After a couple of hours we arrive in Budapest, met up with our promoter since forever, Lazlo and stuffed ourselves into a van. Some 2 hours of driving and we're in Tokaj (at least I think so). We checked into the hotel and while some of the guys headed straight to dinner at the hotel. I enrolled in a scouting patrol, looking for alternative sources of food with Punky (Production Manager) and Tero (guitar,bass and keyboard tech....also the ultimate wizard with any electronic devices, just FYI). We walked around in the hot sun, didn't find anything except a couple of churches = still hungry we went back to the hotel restaurant. The good part about this was that the ones who went straight to dinner already had their food in front of them, so it was easier to pick a favourite with the visual aid. A short rest in the room later and we're being picked up for the festival. 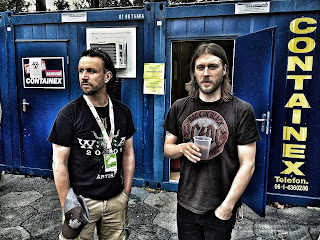 Tony & Marko at the festival backstage in Tokaj.

Pretty basic night really, some interviews, checked out some local bands and then just got changed and attacked the stage. Elias guitar was clipping a bit at some point but no major technical issues and a pretty decent show in my opinion. After the show we left asap since the wake-up call was really early the next day....got to sleep around 0200.....

0400 the alarm goes off in my phone and it's time to get the fuck up and get moving. Slept a bit in the vanride to Budapest and then it was time for the usual "let's wait at the airport while they're trying to figure out how to get us on a plane with our equipment"- shit. Nevertheless we got the stuff checked in and headed for the plane. All well until our drumtech for the weekend, Jari got stopped in the security control, appeareantly his carry-on baggage was too heavy (how they knew without weighting it remains a mystery to me). Well, as they try to squeeze him for money (as if that would make the bag lighter) the dude, quick on his feet, explains that his wallet is already on the plane and he has no money (at this point everybody else is already on the aircraft so we can't bail him out). When the security officer tells him that he can't get on the flight without paying, he just calmly point out that his bags are on the plane and it's against regulation to take off with just his bags and not him onboard. A really pissed off security officer tells him to get on the plane.....you have one minute !!! That's of course no problem and Jari is grinning with satisfaction as he enters the plane and tells us his story.

I tried to sleep a bit in the plane but it doesn't happend. After we landed in Dusseldorf, it's again time for a couple of hours in a van. I try to stay awake and plan to sleep at the hotel but of course I pass out as soon as the car hits the road. At the hotel it's again time to rest and load up for the show tonight. We decide to move our arrival to the festival as late as possible, so we get more time to sleep. A nap and some food with Elias and Marko and then it's off to the festival. We'd never been to Zwarte Cross before and this festival has a bit of everything. Just google it if you want to find out what the hell I mean. Doro is playing just before us and we manage to say a quick hi to the guys and watch about half of the set before it's time to get changed for our own set. As some of you may know we did an European co-headlining tour with doro back in 2006 I think it was. A really amazing thing with tonights Doro show was that our friend Masa (and Sonata Arctica Japan webmaster among other things) is playing guitar with the band !!! Bas hurt his hand so Masa was asked to help out, how fucking cool is that. As far as I saw, Masa was enjoying himself a lot and having the time of his life. Cheers !!

As for our own show, it somehow felt a bit shaky in the beginning but after the first song we get a grip on ourselves and the focus together. It was cold as hell to play so all the solos and noodeling stuff was a bit of a pain in the ass to try to execute properly. Nevertheless our Dutch fans were really into it and all in all we had a good time. After the show we went to the hotel and toasted the weekend.

Checked out from the hotel around noon and we all went to the cafe terrace next door since there was 2,5 hours to kill before our ride would arrive. Food and drinks and general lazyness, stupid stories, laughs and
of course a bunch of cigarettes. Our ride arrives, 2 hours later we're at the airport, checking in the stuff, drinking beer and then for the first time I got to go to the airportlounge with Elias to enjoy free drinks and food.

Henkkas Travelling tip no. 540: get yourself a diners club card, it will get you free access to airport lounges around the world (naturally if you only travel once a year or something, this advice is useless.)

Onto the plane and off to Helsinki, the hotel and useless TV. One of our crew guys is really sick on the plane so he spends most of the flight in the toilet....puking.... poor bastard, wonder if the drinks last night has anything to do with it ?

Schaisse, I forgot about one thing. The hotel last night was situated next to a church which played some horrible albeit changing tunes on some hellish tubular bells or something every 15 minutes. Every 30minutes the song was horrible long and the other ones were just short burst of anxiety. Horrible awful shit music, loud, out of tune and....I'm speechless actually. Luckily it didn't play through the night but naturally the fucking thing had to start at 0800 in the morning. Way to go !!! 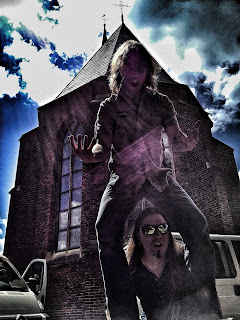 OMG there's an Elias between my legs !!!

Got up at 0600, feeling sick (no not hangover this time), breakfast, short flight and
then we were home.

Right now I'm at home with a hellish fever, trying to get some rest before the next weekend. Luckily
Q-stock is only around 120km from my house so we're heading out in the afternoon next Friday. That
leaves me around 3 days to get well, which shouldn't be a problem at all :-) Pics again by Tommy, ain't
it sweet of him ?