What could be cooler than supporting Guns'n'Roses ? Or at least the dudes that are operating under
that name these days. Naturally we didn't get to see the show because we had to leave straight after our own bit, in order to make it to the Tuska festival in time, what a bummer. Anyways let's start from the beginning.

We had a short rehersal in the morning before putting our shit together and flying down to Helsinki and a night at the airport hotel. Nothing spectacluar just hanging out a bit watching football and trying to get to bed as early as possible. With us we also had Tapsa our longtime on and off roadie filling in for an absent Masi. 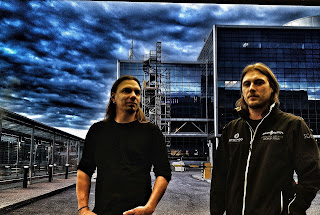 Getting some fresh air during the game...

Got up at 0600 and after an excellent breakfast  we headed for the plane and the travel towards the Seerock festival had begun. A couple of hours later we arrived in Vienna and jumped into the shuttle cars. A quick stop at the hotel and then towards the festival. During the 200km ride one of the drivers almost fell asleep while nobody in our 3 cars seemed to know where the festival was. I find it very interesting that the shuttledrivers provided by the festival don't know where the festival is. Some extra hour later we managed to get there so no harm done. Most of the people were there to see G'n'R so we got to play in front of a lot of new faces. After a hot day and a short but intensive 50min set it was time to drive back to Vienna and our hotel. This time one of the other drivers almost fell asleep. Appearantly their schedule was too tough if they can't stay awake, quite a concern when there are lives at stake. Anyways we got to the hotel around 22 something and went to bed, also got the news about the Lamb of God singer being arrested.

Wake up at 0345, quick shower and straight to the airport. During the check-in everything seemed to go really slow and somehow we got the feel that this won't really work out too well. Borded the plane and flew to Helsinki via Berlin, tired but happy about the possibility to get to the hotel around noon and take a nap. Well, keep on dreaming boys because there's no sleep in store for you. When we arrived in Helsinki, all our luggage was missing. Keyboards,Guitars, the drum-module, the soundcard and our stageclothes. Things became even better when we were informed that the stuff would not arrive before the show. So, instead of  going to the hotel and sleep we went straight for the festival and started borrowing stuff in order to make the show happend. The good thing was that we had about 6 hours to get everything ready. Our techs and the local promoter did a hell of a job in finding everything and we chipped in as much as we could. Clothes were bought and we even made the evening-paper news. After a long day we got everything ready and hit the stage as scheduled.

A HUGE fucking THANK YOU, to all of those who helped us out and made the show possible !!!
It's because of people like you there's still hope for humanity  !!!! THANKS !!!

After the show we had a singing session for about 45min as well as a bunch of interviews. Back at the hotel we managed to catch up with Jörg, whom we hadn't seen for a while. He was out with Ministry and they were playing the next day at the Tuska festival. At some point it was time to get the much needed sleep which was very welcomed indeed. 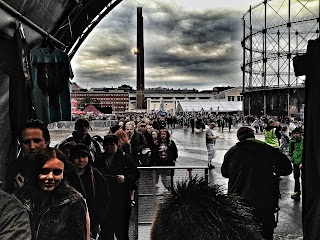 The line at the signing session @ Tuska :-)

Slept as late as possible and then went out for a burger with Marko, Tommy and Punky. We headed to the airport just after 2 in the afternoon to catch our 16:10 flight to Kemi and a couple of weeks off before the next festival weekend which is Hungary and Holland on the 20th and the 21st. Until then....there will be silence.

The pics are once again from Tommy.