Friday 3.8. - Kokkola Rock
Got picked up around 1430 in the afternoon to head out to the town that I grew up in. Some hours later we arrived in Kokkola and checked in to the hotel. Since our showtime was rather late (2345) I spent the evening at my friends house playing ps3 and catching up on things. Good times indeed. A bit later when I  went to the rainy festival area, I checked out Matti Nykänen's performance for a couple of songs. For those of you who don't know, he was the most successful ski-jumper ever....and after doing that he's been a tabloid hero in Finland. Divorces, fights, jail....he's pretty much done it all. Anyways, the show went ok, no big issues and we were all enjoying it. Personally it felt really special since this was the first time we played in my former hometown with SA....after all I've been in the band for almost 10 years now so it was not a moment too soon. Had a few drinks after the show and met up with some people, nothing major though. 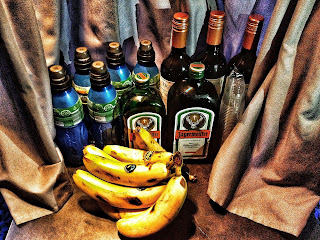 This is Tommy's Corner before the show.... 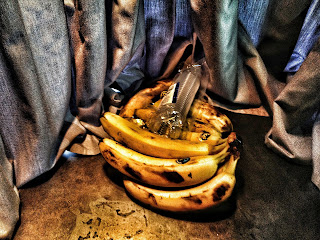 ...and this is his corner the next morning. Go Bananas :-)

Saturday 4.8. - Sotkamon Syke
Breakfast at 10:30 and the straight to the bus. Spent the ride playing bass and fiddling with the computer. Quite boring actually. In Sotkamo we went to the hotel and I started watching the Olympics but passed out for a couple of hours. Later on I met up with a friend of mine and we checked out Battle Beast together. In fact I used to be in a band with Nitte the singer like 5000 years ago or something, playing Deep Purple and Whitesnake. I enjoyed the show and then it was time to get ready for ours, listened to Finntroll a bit while getting ready.Hell Yeah !!! Our own show went along just fine until the intro of Fullmoon where I somehow lost my train of thought completely and fucked it up. I realized that I dropped the ball when Tony started laughing. Well, we're not a fucking Ed Sullivan show so I just gave it another shot and we were back on track. Rock'n'roll baby !!!  We had the sauna at the hotel ready after the show (the gig started at midnight btw) so we had a late night Sauna before heading down to the bar, just in time to have one drink before the last call. I hate playing these great slots in the middle of the night but what can you do ? I think the last two summer shows have decent showtimes so I'll stop whining right now. At least about that. 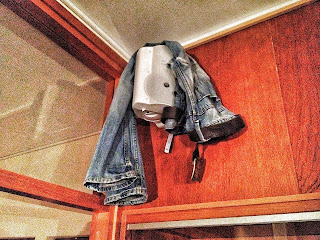 Somewhere in Sotkamo a dude is missing his pants....

Sunday 5.8. - Travel Day ( Sotkamo-Kemi)
Almost missed the bus, I pressed the snooze button on my phone one time too many. Once in the bus I slept the whole ride home....guess I'm getting old :-) Next up is Joensuu and Mikkeli and then we're done for the summer.