Friday 10.8.- Kerubi, Joensuu
The last trip for this summer, it actually already feels like fall but what the hell. Entering the bus at around 10
in the morning and starting to pick up the rest of the pack....nothing new here.Some 500km, a foodstop and some cigarette breaks later we arrive in Joensuu (or Joe's mouth, as it's translated in the Lonely Planet Guide....well maybe not..). This remainds me of a couple of hitch-hikers we picked up somewhere in Finland like almost 10 years ago or something. They had this travelguide-whatever to Finland with them and of course we had to check out our respective hometowns at the time and what it said about them. About Kemi there was something like: Small Industry town by the sea, nothing to see there and if possible please skip it....my laughter ended when it said something pretty similar about my hometown back then, Kokkola. Their book may have been right but what the hell, it went out the window anyway....in conclusion, don't believe anything you read. 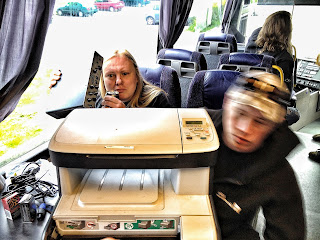 ...back to the task at had:
Hotel arrival, afternoon nap...you know the basic drill. When I went to the venue everything was as I remembered, totally excellent food, really friendly staff...I mean this place is really great. We worked up a good sweat for about 90min and the sold out crowd seemed to be really into it so, allez gut as they say.
After the show we had a couple of drinks (why does this sound soo familiar) and I really enjoyed watching Marko and Elias sign a whole bunch of autograph-cards. (I did my part during the busride :-) ). We also met Samuli from our webshop and talked about some future merch-ideas....it'll be great !!.

Saturday 11.8. - Jurassic Rock, Mikkeli
I didn't really have it in me to go for breakfast when I woke up but Marko made me do it. Thanks man it was
totally worth it. Jumped on the bus at noon and headed for Jurassic Rock in Mikkeli. Some hours later we check in to the hotel and take a nap. Waking up just before 1800, I was starting to feel a fever rising, what the hell, I was just sick for a couple of days some weeks ago, what is this shit ? Anyways we headed off to the festival site to get something to eat. Not to put anyone down but this was the worst dinner this summer. The backstage snacks and drinks were however really good so no harm done. By the time we went on stage the temperature was around 5 degrees celsius, which is not that cold, except for when you try to execute fast passages on your instrument :-). We all managed to survive and next time I'll be sure to always have a long-sleeved shirt as backup....just in case. After the show there was some warm chicken-soup waiting for us backstage, this again tasted bloody amazing !!!! Thanks a lot !!. About 30min after the show we had a sauna ready as well and it was time to start celebrating the end of the summershows. From the sauna we went to the hotel, just got get rid of our bags before we headed across the street to a bar where a cover band (which appeareantly were Elias buddies) rocked out. Enjoyed the music and overall noise.....eventually we all faded into our beds. This summer went by really fast, and it was quite easy...the schedule was very light and everyone in a good mood....during the fall we have a lot of work so it's nice to have a couple of weeks off before we start the rehearsals for the fall tours. 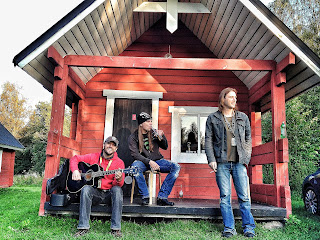 Sunday 12.8. - Travel Day (Mikkeli-Kemi)
The sauna & drinks didn't appeareantly help me get better so I slept the whole way home, Got off the bus
just after 1700 and was back to sleep some 3 hours later :-) Next up is the Finnish club tour. See ya.