What a hangover, it's just after 1600 and I just got up from my bunk. Last nights show was really a lot of fun and Tony started to try to do some of the speaks in Swedish which of course was totaly out there. Well, it made me and the guys laugh...let's see if he keeps it up tonight. During the show Elias guitaramp started to do some crap at one point but other than that everything went smootly as expected. Since we had no opening band and it was in the middle of the week, the show started already at 2000 so just after 2300 we were at the hotel. A quick shower and some drinks later some of us decided to go to the Pub Anchor for some more drinking.... it was fun and we ended up with hangovers for today. During the ride here to Göteborg we stopped at a Burger King so I managed to down a Bacon & Cheese Whopper  before I went back to sleep in my bunk. At the moment I'm getting myself and my stuff together and thinking about going in to the venue, our soundcheck should be in an hour or so, I have no clue about when the show is or what else in in store for us.....dinner at some point I guess...and if I get to go online inside the venue I'll post this and maybe even bug Tommy for a couple of pics...I know he must have something. See you all tonight and I'll start working on this goddamn hangover....I'm sure it'll be gone before the show.

...yeah I got a couple of pics from Tommy...of myself ;-) I'll put them below..and I also just found out that my spare M3 is with us so buying the amazing piano was just a stupid mistake....well...so fucking what. 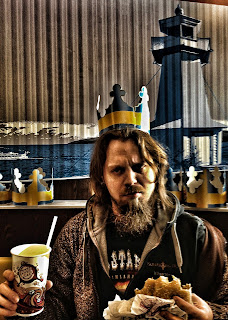 Starting the meal....hungry and hangover... 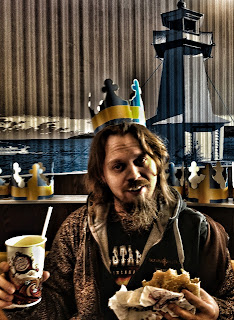 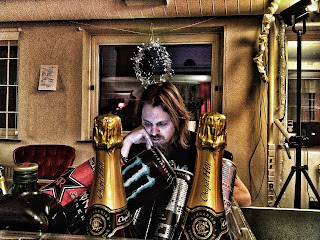 Finally managed to get to the venue and backstage.....and online.....