Hello,
Yesterday was a lot of fun and we actually got some nice vodka after the show so all is well :-) Today we've done some inties and that's about it. Went out for lunch with the whole band and talked some business as well. At the moment I'm getting ready to play a sold out show here in London.Life is good. Atfter tonight we still have the festival season to survive and then it's time to work on some new music. All in all this tour will be the shortest one we've done since the Winterheart's Guild Tour back in 2003 when I just had joined the band....interesting. The show total will be just under 100 this time around. Regarding rumors about us going back to Latin-America later this year...we will not do that, we're gonna focus on our next album in order to get it out next spring. Keep your thumbs up that everything pans out !!! Tomorrow we have a couple of flights to get home so I'll probably finish this then and maybe get some photos uploaded as well...I guess it all depends on how bad of a hangover I'll have after the tourending party tonight.

here's some typical SA fans at the merchbooth in Manchester, pic by Laura 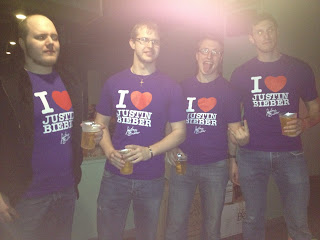 The show last night (in London) was really hot, great and a fucking killer.Everybody was happy and well so ..it was a win win beer situation. A quick bar stop with Punky and then off to bed. Naturally the next day started with a massive hangover.A nap on the plane and some drinks in Helsinki, Next stop Home.Bed,Lights Off and that's about all I have to say about UK.

btw Tony thinks that the Stones Grow Her Name World Tour ended here in the UK but I think that the tour actually ends when the festival season is over. We had the same debate earlier on some tours but I guess we'll never come to an agreement about this. Oh the drama of being in a band, Awesome !!

Oh, and a dude name Elliot took a couple of pics of me & Elias soloing: 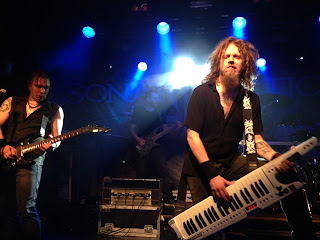 ...and no my face is not photoshopped...scary shit man !! 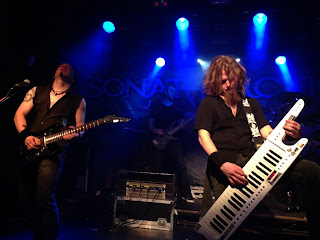 A somewhat more family friendly take on the thing....