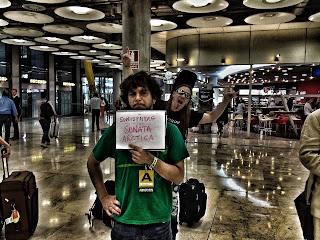 and so it happended on the 24th;
Early flight from Kemi to Helsinki and of course then the madness begins. Can you imagine how we spend some 6 hours of waiting at the airport, I bet you can. Be that as it may, everybody get onboard and we're good to go. The gear is loaded.....most of the band is loaded and the crew is getting into the mood as well. Arriving at Madrid airport, basic hassle and off to the hotel and a decent attempt to get into bed early. Epic FAIL of course but we have time to sleep in the morning so no harm done.

and on the 25th the good stuff begins: 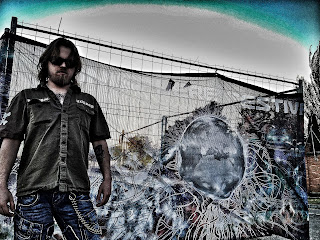 Since we missed breakfast I head out for lunch with Marko. Cheap, good and we're back alive. As we arrive at the festival there's a couple of interviews to be done and some photo-shoot thing. Pretty soon it's showtime and we hit the stage in front of several thousand people. We only had a short 55 min set so it was over quite fast, nevertheless we managed to play 4 new songs, Only the broken, Shitload of Money, Losing my insanity and I have a right. We've already rehearsed a couple of other ones which will be in the set during the summer. It's been really fun to play new stuff and on top of this we've changed the stage-setup as well so there's a lot of things to get used to. After the show we did a signing session and later we watched The Offspring and Soundgarden which of course was enjoyable.

and then we turned towards hom on the 26th
..and early wake-up, far too early for me (0700) and off to the airport. I slept the whole flight to Helsinki. Instead of flying home we took the night-train up north, a few drinks and some quite interesting discussions with other people in the restaurant car. We also decided to upload a couple of pictures on our facebook page.....what an original idea ;-)

and then it's a short break before Tampere on the 8th of June. See ya There !!! 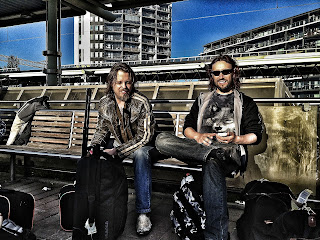 ps. A big thanks to our drummer Tommy for the great pictures.
Lähettänyt Hank klo 11.24