Friday 27.7. - Q-stock,Oulu,  Finland
Got picked up by our new bus from home (which is always convenient) just after 12. Had the time for all the morning rituals without having to hurry (also a bonus). Picked up some of the other guys and headed towards Oulu. Most of the gang wanted to go straight for the festival, but since I was feeling a bit tired I opted for the hotel and a couple of hours of rest. At around 1700 it was time to go to the festival, hit the dinner table (2nd breakfast for me :-) ) and get ready for the show. We decided to play the same set that we did in Zwarte Cross last weekend, we only changed the intro to I have a right a bit to make it more dramatic when the band kicks in. If you know the song you'll know what I mean when you hear the new live version. If you don't know the song then you're probably lost on the wrong blog page or whatever :-P Not that I mind....everyone is welcome here !!! Be that as it may....I shall remain on course and:

As usual, the weather was great, the show was great and everyone was happy. Somehow I forgot that
The Last amazing grays is one of the songs we use pyrotechnics in, so it should be in the set during the summer in Finland....as Ari our pyro guy pointed it out I told him to use the flames in the chorus of Alone in Heaven instead. Well....not the best idea but we did it. It was quite a challenge to sing heaven while the flames from hell bursted out but somehow we managed to do it withouth rolling on the floor laughing. I'll make sure to remind everyone that the last amazing grays should be in the set for the rest of the Finnish festivals....or figure out another spot to use the flames.

Afterwards we got to check out Apocalyptica and it was nice to meet the guys again. It's been a while since we last hung out. At the hotel I went for a beer with Elias and that was pretty much it for today. Tried to get a good night sleep 'cause as you may guess, again this weekend there will be one night without any sleep again so....you take what you can get, right ? 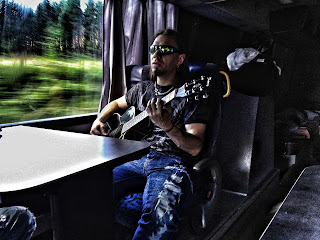 Elias jamming on the way to Nokia.

Up at around nine and having hoovered the breakfast buffet it was time to get into the bus and head towards Nokia. During the 8 hour drive we spent checking out acoustic stuff....can't say more about that though. You'll see. The bass player from hell will return :-)  The only other event during the busride was a lunch-stop and that's about it. Arriving in Nokia we see a tent in the middle of the city (or village if you will) and that's where the festival is. We just grabbed our bags and headed for the hotel for rest & showers as well as watching the olympics on TV. It was quite hot outside and in the room it wasn't much better. Well, in a few months I get to complain about how fucking cold it is. The show in Nokia was a lot of fun, it was still very hot inside the tent but everyone was excited and it felt much more like a club show than a festival, with the audience being close to the stage. As we blasted through our 90min set we also decided to make some changes for Rome since the setlist seemed a bit too slow in the beginning. We'll see how that works out. After the show we signed a few things and took some photos before the bus left for Helsinki and the airport hotel.

Sunday 29.7.- Travel Day (Helsinki-Rome)
So this time I managed to sleep for the whole of 30min before it was time to get up and get moving. Need I have to say that I slept the whole flight to Rome ? Well I did and it was goooood. A short shuttle drive straight from the airport to the Hotel and then it was decision making time. At home my plan was to check out the city on the first day, however the reality hit me after a badly slept night, so instead I hung out at the bar with Elias and Marko....what a surprise. I had to take a daytime nap in between and the evening was also spent back at the bar. Good times :-) 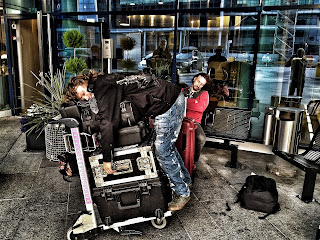 A demonstration of how tired yours truly felt in the morning.

Monday 30.7.- Rock in Rome, Italy
After a good nights sleep and a great lunch we headed towards the venue for the soundcheck. We're talking late afternoon here folks. Our show was at this gigantic race-horse track-thing, really interesting in fact. Anyways, during the soundcheck everything worked fine and we also managed to get some dinner down before the show. The weather, for those of you who are into that kind of thing, was hot as fucking hell....some 35-36 degrees celsius = far too hot for any of us northern boys to be functioning normally. Luckily it dropped to around 25 when we went on stage so it was "just" a hot show and not Dante's Inferno. The show was ok and I have to give the loudest audience of the summer award to our fans here in Rome. OMG or whatever the kids say these days. It was a truly great night, thanks a lot !!! Our festival summer ends in a couple of weeks so there's stil a chance that someone is louder but I doubt it. (challenge accepted, anyone ? ). Drinks, general chatter and hanging out on the hotel patio ended the night. Laughter and stupid jokes, I think you know how it goes......if not....imagine :-) 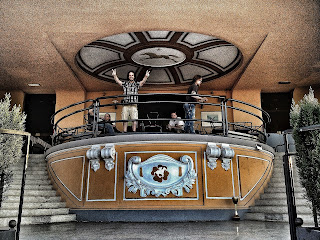 Our backstage, the local polo club or something.

Tuesday 31.7.- Travel Day (Rome-Helsinki)
Ok, so now's the last chance for me to actually drag my lazy ass to the city. I checked out the hotel breakfast for the first time on this trip, well to be honest it was shit. Sorry for being so blunt, but what can you do ? We got a bunch of guys together, some romecityvirgins and some that already checked things out on the arrival day. Spent most of the day walking around, subwaying around (is that actually a word ? shit, it is now, let's at least agree on that). and naturally having sports drinks (=beer) to keep the energy level up while swirling around like idiots under the hot sun. We found all kinds of places, shops and whatnot. Bought a bunch of stuff for the kids and even took a couple of pics. Sweated like pig btw. 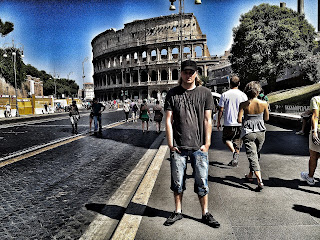 Tommy on the way to become a gladiator...

At some point we were done, got back to the hotel, in fact me & Masi our drumtech (yeah, we have many and even I get confused sometimes) took the local bus back to the hotel. Nice, easy and cheap......packed our bags, one last caipirinha (it might have been 2 or 3) at the hotel and then it was off to the airport. I think today was the longest and most unorganized security control in a while......
....I hit the lounge, stuffed myself with some snacks and Jack & coke and boarded the plane to Helsinki. (just for the record, it was late but we don't care about things like that at this point do we ? ). Since I'm writing this as we go, right now we're on the plane and the ending might change but at the moment it looks like this, provided we don't crash....i.

Landed in Helsinki &  got our stuff, went to the airport hotel to get a good nights sleep before going home. Isn't it great that we live only one one hour flight away from Helsinki but somehow we always have to spend the night there at the hotel........well, that's rock'n'roll nightmare logistics. I think I should run for major in Kemi and make our tiny airport an international hub so we can fly straight to anywhere in the world 10 times a day.  Yeah, I agree....it's time to sign out....to be continued.

Wednesday 1.8.- Travel Day (Helsinki-Kemi)
Spent the morning just chilling in my room, relaxing and enjoying the solitude and silence. In the late afternoon we checked out, went to the airport and grabbed a bite to eat at the restaurant, which was the Irish type sports bar at the airport. The food was really great but the service was unbeliavable slow, usually at airports the restaurants are way faster than anywhere else but in this case the opposite was a fact. It was a good thing that we got there early so there wasn't any hassle. At the moment we're flying home and provided that all goes well, our next show is in the town were I grew up, Kokkola, on Friday. So we have one whole day at home :-)