When we arrived in Tokyo, it was time to have some drinks and later we headed to the New Lex and some other bars as well. Got up the next day in the afternoon feeling like...hmm...like always in Japan on the first day ;-)

The show last night in Tokyo was cool, we don't have the full crew with us this time so it took a while to set everything up and make it work properly. In a couple of hours we'll be in Osaka and have around 2 hours to rest at the hotel before we go to the venue.  Attached here are a couple of pics with Punky: 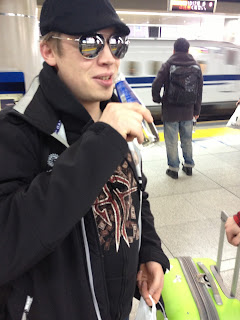 @the trainstation in Tokyo having a morning cider and getting the groove on.... 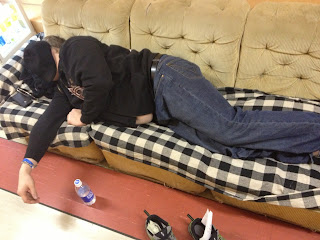 @the backstage in Osaka, the end of the rainbow :-P

Anyway, tonight we'll play at the Big Cat and tomorrow is the last show of this HKI-Russia-Japan-inferno in Nagoya that is... Nothing much going on , I went out this morning to get some breakfast from 711 instead of ordering from the room service. Watched some comedy on FOX and got ready for this...so...Osaka we'll see you tonight. Stay Classy !!!

EDIT: The show was a lot of fun and afterwards we naturally went to ROKROK as always, it was a bit on the quiet side since it was Thursday but whatta hell....good times anyway.