The Utrecht show and going to UK

Travel Day 11.4.
So, I got up at 0500 and dragged myself to the airport in order to catch the 0700 flight to Helsinki.Well over there we headed for the hotel and a couple of hours of rest before we continued our travel towards The Netherlands via Copenhagen. Since our flight from Helsinki was delayed we missed the connection and ended up spending a night in Copenhagen instead. Dinner and a couple of beers before
heading to bed.....

Utrecht, Showday 12.4.
In the morning I realized I'd lost my ticket to the subway and decided to not worry about it too much, well of course there was an inspection and I got fined and almost missed the flight. Oh Shit !! To make matters even more annoying I later found my ticket in my pocket....nevertheless we got to Amsterdam, at least most of us did, and then boarded the bus for a short drive to Utrecht. I think we have played here before but I'm not sure. The day was spent just chilling, and in the evening we rocked the place in front of almost 900 crazy dutch fans. Afterwards we hanged out with our friends from the fanclub, beers and stuff ;-)

On the cover of the new fanclub magazine there is a really rare picture of Marko smiling, since I have never seen a pic where he's smiling before I asked for it from Milou who took the pic and she just sent me it so I'll post it here for all of you to enjoy !!! 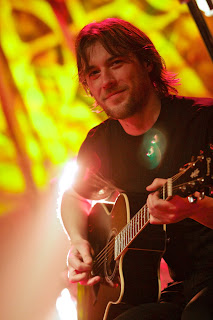 Travel Day 13.4.
Woke up while we were driving towards Calais from were we took the ferry to Dover and then spent the rest of the evening driving up to Nottingham. Upon arrival (around midnight) I headed out with Marko for a couple of drinks...during our drive we also had a wine and cheese evening in the front lounge, I guess we're getting old. I'll harras Tommy for the pic a bit later.

Nottingham, Showday 14.4.
At the moment we're hanging out backstage in the club, waiting for our soundcheck to happend. I just woke up a couple of hours ago so it's yet to be determined how this day is gonna turn out. Really looking forward to start the UK tour and playing 4 shows in a row with no boring traveldays in between ;-)