Monday 24.9. Travel Day, Kemi-Helsinki
...just jumped on the train in the evening for an overnight run down to Helsinki. Marko
joined me from Oulu. Pretty uneventful ride since we slept most of it.

Tuesday 25.9. Tavastia, Helsinki
We go lucky with the hotel and could check in just before 10 in the morning. Most of the day was spent sleeping and watching movies. We did a signing session at the Levykauppa ÄX in the afternoon and before long it was time to do the show. The acoustic thing is starting to work better and better by the night but during the last song Tony cracked me up and I spent the rest of the song trying not to laugh the whole time. Well, we're a bunch of clowns anyway.  Since we were going to have an early show the next day we headed straight to the hotel after the show.

Wednesday 26.9. Tavastia, Helsinki
Went to the gym with Tony and Marko in the afternoon, other than that I pretty much stayed in my room and rested. The show was an all-ages thing and started already at 1900. It's still a bit weird to play that early in a club but somehow we got ourselves going and in retrospect I think that this was the best of the three Tavastia shows as far as the band playing tight and everything running smoothly. Somehow we managed to take a detour via the Bäkkäri bar before the hotel, which might not have been the best idea.

Thursday 27.9. Tavastia, Helsinki
Since we had a late show, I could sleep most of the day and thus get rested and ready. Our manager caught us off guard by not telling us that we were going to get our gold-albums for Stones Grow Her Name during the show. We had a business meeting in the afternoon but he didn't say anything about it then so....just as we were starting Shitload of Money, the stage was invaded with people that had worked on the album and we were given our gold-albums. Lots of pictures were taken and it took a while before we got to continue the show. Afterwards we got champagne and of course got detoured to the Bäkkäri bar again and this time it was definately not a good idea...or was it ? Can't remember. Anyways we spotted Neumann and Tuksu two finnish celebrities, famous for very different reasons though. 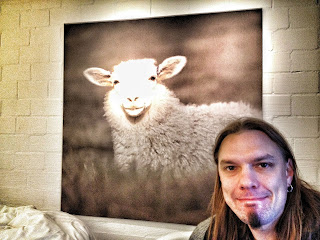 Welcome back to Tampere, I give you the
judgemental lamb....with Elias of course..

Friday 28.9. Pakkahuone, Tampere
What a horrible hangover all day....I guess we're not 20 anymore :-) Anyways, in the evening when it was time to get onstage I was already feeling pretty close to normal. Sturm und Drang was our support band for tonight (haven't had openers before this on the tour), I managed to catch a few of their last songs. Since this is Elias hometown it's always kinda special to play here. That and the amazing crowd who definately were out to have a good time. Btw almost forgot that we had a signing session again at Levykauppa ÄX, it went smoothly so nothing special about it. Went straight to the hotel after the show since we had one more show on this part before taking a few days off. 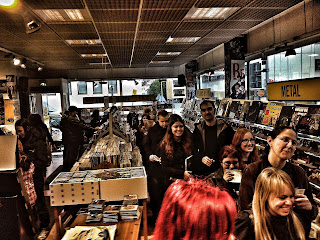 Saturday 29.9. Sibeliustalo, Lahti
Woke up in time for breakfast for the first time this week :-) , A short drive later we're in Lahti. The venue today is a concert hall, meaning numbered seating and balconies and whanot.....and of course an early show (1900). The backstage is as you can expect with separate rooms for all the bandmembers and mine and Tonys even had pianos in them in addition to the private shower and beds....unbeliavable. Well, being that all the circumstances were excellent, we of course had to work our asses off during the show to get the crowd into it. I guess most of them were standing by the end of the show but it took us a while to get there. 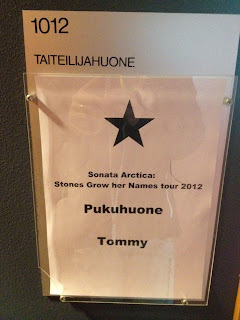 Afterwards we went to the sauna upstairs, had some food and drinks and packed ourselves into the bus. Some 600+km later I get dropped off at home, just in time for breakfast....for the second time this week. 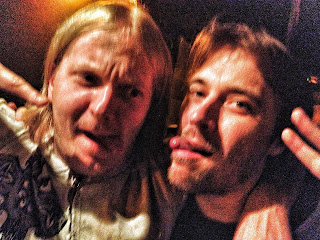 Some crazy fans or something that joined us on
the bus from Lahti and back home...very weird guys.