According to my itenenary I was picked up from home at 10:15, picking up the guys, occasional food stops and some 3 hour nap were the main events during the ride down. Chilled in the hotel for some time with the guys before heading towards dinner & soundcheck, my favourite combo :-)
I don't remember how many times we've played here but it's been a couple at least. Pretty cool venue, nice people and so on...we'll see what happends tonight, goddamn I can't wait to get onstage !!! A couple of our friends from Studio57 are coming down to the show as well, it'll be nice to catch up and have some....you guessed it: beers. Alrighty, friends arriving, some hours to showtime. I'll get back on this later....maybe tomorrow or whatever.

Kinda great night, the band clicked and the audience was responsive. A happy day at work so to say. The only minus is that I just got back to the hotel and it's 0230 and we have to get up and going at 0700. Doesn't sound too bad but I'm not feeling a slightest bit sleepy....shit. Good luck then and let's see what happends. Tomorrow Oulu, signing session at the Levykauppa ÄX and whatnot. It'll be great....I think. 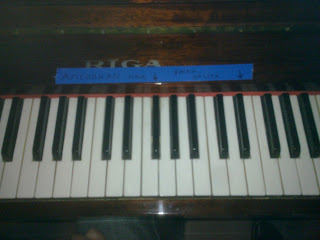 btw we found out that our tape, marking how to play the Ameriikan Juna-DVD-menu song were still taped onto the piano backstage, so if you're ever there check it out !!!

Saturday 6.10.-Club Teatria, Oulu
What a nice little nap, wasn't it ? Be that as it may, we had some breakfast with marko before heading to the bus and sleeping most of the drive to Oulu.At the moment we just got in to our hotel and in a few hours it's time for the signing session.

...The signing session was smooth, like they have been on this whole tour. We went straight to the venue for soundcheck and dinner. I can't remember how many times we've played at Teatria but it's a very familiar place and naturally the show was really cool. During fullmoon my keyboard got caught in one of the stagelights and I tipped it over, trying to get free.....well sometimes these things happend, no biggie.
Afterwards we made a quick stop at the hotel before heading out for some drinks and dancing (haha, as if...) 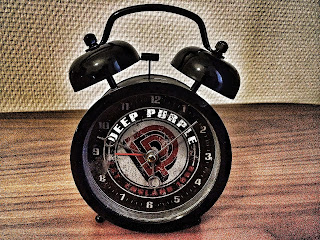 This is our Bell of Doom, when you hear this sound
you'll know it's time to get the fuck up !!!!!!

Got a bit drunk yesterday but was is shape for the 0900 breakfast and the 1000 lobby call for the ride home..... next Friday we'll have the last show of the Finnish Tour and the last show in Finland for quite some time. We're all really looking forward to get on with the "proper" touring, these weekend shows are somehow a bit confusing. It's a bit hard to get into any groove with just a few shows in a row and at home it's hard to get into any decent rythm in just a couple of days. Blah blah, as said, one more and then we'll go and play for everybody else :-)