Thursday 20.9. - Lutakko, Jyväskylä
We start the fall touring in Lutakko, I just counted and this is the bands 9:th time playing here so you can say we're quite familiar with the venue. We have some new songs in the setlist and we're also doing a signing session during the day at Levykauppa ÄX so there'll be plenty of stuff going on today. We'll see how long it takes to get into the touring groove....the show was a bit on the shaky side, at least from my point of view...I doubt anybody noticed though.. This was the only show on the Finnish tour that we didn't do the acoustic thing...why ? The stage was too small for that and a couple of technical issues played their part as well. We played Breathing and Last amazing grays instead which you probably won't hear on the other shows. Left for the hotel about an hour after the show and spent the night watching movies and relaxing. 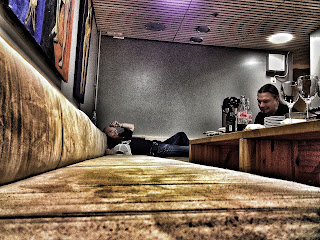 Some hours in the bus and it's time for Savonlinna for the first time for us (as far as I remember). The venue is a concert hall more suitable for classical music than rock'n'roll but that doesn't stop us. The showtime is already at 1900 so there wasn't much time to do anything except the usual soundcheck/dinner/getting ready for the show. Afterwards we hit the local pub for some drinks and pool. Btw,this was the first time on this tour that we did the acoustic thing and the plan is to do it on the rest of the Finnish shows as well as on the European Tour. The songs might change but at the moment we're doing Tallulah, Dead Skin and Wanted. In addition to the new songs we introduced in the setlist during the summer we're also playing The Gun and The Day as part of the set. These things might change and you never know what will happend but at least our aim is to keep this setlist for the fall and then check it again in January and see what we come up with for the spring season. 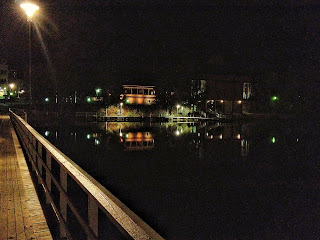 Walking from the hotel to the bar :-)

Overslept again, shit. Anyways we got kicked out of bed and headed towards Turku. A nice little 500km morning drive. As we were in a hurry we went straight to the venue instead of going to the hotel. About an hour later we were picked up for our signing session at the local Levykauppa ÄX. Again everything went really smooth and we signed a whole bunch of stuff, took some pictures and chatted a bit with the people.Back at the venue we did our soundcheck and had dinner (stop me when this starts to sound familiar, ok ?)... and then it was time for me & Marko to get our hair cut :-)
The show had a couple of memorable moments like when we stopped to play Tallulah and the crowd kept on singing it....another thing happened during Wanted that led me & Tony to burst into laughter during the latter parts of the song, making it hard to perform it correctly. Well, we'll try to do it with a straight face next time....I think it's important not to take everything so fucking seriously all the time....relax goddamit !!! Met up with some relatives after the show and took a quick few drinks at the bar across the street from the hotel before heading to bed in order to wake up on time to catch the train up north in the morning.

Sunday 23.9.  Travel day Turku- Kemi
There's something going on with the universe, trying to prevent Marko & I to wake up in the morning, I have no clue what it is but I'm started to get convinced that there are some dark forces operating. You might think that's funny....well go ahead and laugh out loud but this next thing I'm about to reveal might make you a believer. Here's what happened:

In order to be sure that we we'll wake up on time I did the following preparations:
-set the alarm on my phone to 0555
-asked the hotel to have the wake-up thing set up at 0600
-told the receptionist to call me at my room at 0605
-reminded Marko to set his phone alarm on
-agreed that our mixing guy Mikko who also was going to come to the train
would call me around 0630 ...we would then meet in the lobby and take a cab
to the trainstation and catch the train leaving at 0700

I know these measures might sound a bit too much but here's what happened. I woke up at 0645, I didn't hear mine or Markos phone go off. The TV-alarm thing that the hotel had set up was not making a sound. The receptionist didn't call. (I think somehow he was trying to wake up the wrong room). Anyway I throw my stuff in my bag, run downstairs and ask for a cab. While I'm waiting I call Mikko up, he's a bit surprised since according to his phone the time is 0550. (later it turns out that his phone had decided to put him on Istanbul time for some unknown reason). At 0655 I get the cab, no Marko in sight, I just make a run for it and made it to the train. Normally it wouldn't really matter if we're a bit late and of course I would never run out on any of the guys like that but it just so happends that my daughter has her birthdayparty today and I want to make it back home in time. So, tomorrow night I jump back on the train with Marko and we head for Helsinki and the shows at Tavastia. We'll see about how the dark forces will operate next week but I'm prepared to take them on and I'll be taking some old school waking up devices with me in order to win this battle.