Friday 12.10.- Kuopiohalli, Kuopio
So here we go probably the last show on home soil before the festivals next summer. The day started out really great, got picked up at my house around 0520 in the morning. Didn't sleep too well before that so it wasn't hard at all to pass out in my bunk in the bus. We arrived in Kuopio around noon, chilled downstairs in the bar with Tommy, waiting for Elias to arrive. At around 1500 we're leaving for the venue and soundcheck and after that it's time for another signing session at the local Levykauppa ÄX. 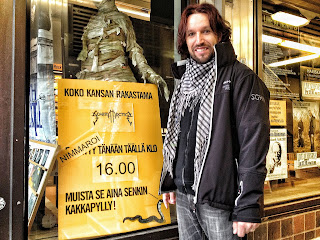 I'll let you know how it goes in a bit. btw just listened through Devin Townsends Epicloud, some great shit ideed. Wasn't too surprised though, after all the man is a genius. Lately it's been a lot of Lana Del Rey, I really like the Born to Die album.... :-) Anyways I'll continue this a bit later when something happends, right now it's me, Lana and my computer with Marko sleeping in the other bed in our room. Maybe not a bad idea to charge up for the night....well.... The signing session was cool, on all of these occasions we've had a really great turnout so it's been nice. 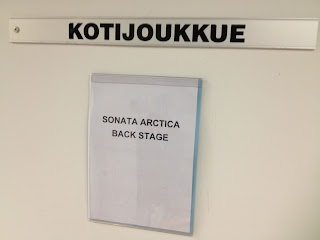 After the signing stuff we went back to the venue for dinner. Somebody had realized the beauty of black pepper. OMG. It was good nevertheless. Before long it was time to hit the stage in front of around 1500ppl. In a 6000 capacity hall it does look a bit weird but whatta hell. We had a really good time and enjoyed playing in Finland for the last time this year. Naturally we had a hell of a tourending party in Henry's Pub. 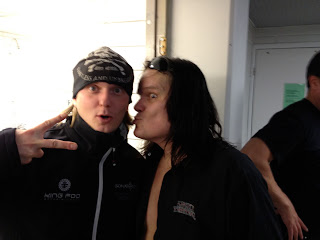 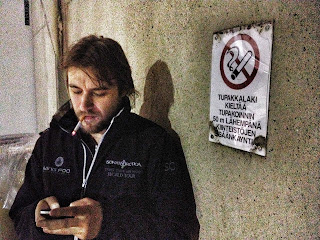 Saturday 13.10.-Travel Day Kuopio-Kemi
Nice fucking headache !!! Sleep, food, jäger.....you do what you can to get in shape. Left Kuopio at around 0900 and was home just before 1600. Thank you Finland. Next up Japan,Europe & America before christmas. We're ready, how about you ?