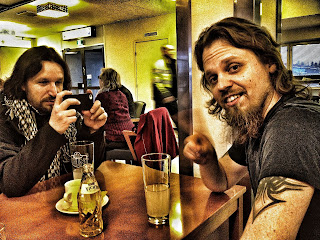 Friday 2.11. -  Travel Day
Flyday, Kemi-Helsinki-Warsaw....Ya wanna hear about how we got on the plane,
had a few drinks, waited for the luggage and took the next plane, got to the bus
had some drinks...dinner...sleep....Fucking Hell, at least I'm bored already....and it's
not of the touring, but the storytelling in this blog is starting to repeat itself. Maybe
because that's how our days are on tour. Always different but still the same. To
make it clear, this is what the next month will look when we have a showday:

10:00-16:00 Wake up, hangover or feeling great,eating. chilling backstage
or taking a walk...hell there might even be some physical excersises.
around 16:00 soundcheck
after that dinner
and then... interviews or a nap
showtime 21-23 or something ....then some drinks, aftershowfood and meeting fans. or
not.
0200-morning the bus leaves for the next show

Anyways what I'm getting at is that I really don't want to tell you the same fucking story 20 times for this tour....the offdays are of course and exception. They'll probably look like this

...so what should we do ? There will absolutely be a lot of amazing moments on this tour. There'll be some downers as well. Waiting for those moments between I ate and I took a shit is a waste of everybodys time so I think we should go a different route this time. I'll be sure to mention any anormalities to the days but otherwise, let's focus on honouring the late Dr.Thompson, Hunter S. that is. Let's go deep down into the pain and explore something else, the world bubbling underneath. Scared ? Yeah,me too, let's see what happends......the tickets are free but the ride is not. I hereby declare the hunting season opened. What ? Exactly. Duck motherfucker :-)