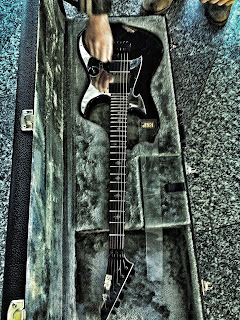 One of Elias new guitars, he's with ESP now :-)

Tuesday 23.10. - Travel Day, Kemi-Helsinki
So by taking the nightrain to Helsinki we started this weeks work efforts which are mainly everything else than playing. Which of course sucks ass. Had a few beers but nothing spectacular.

Wednesday 24.10. - Spending time in Helsinki
The reason why we left already last night, was that we had to go to the US embassy to do interviews in order to get our visas for the upcoming tour. That task took all morning and for the rest of the day we had no plans. Until we discovered that some of the gold albums were still at our managements office, so we headed out to catch up with some of the dudes involved with the making, in order to give them their albums. Which of course led to the Bäkkäri Bar and too many drinks.

Thursday 25.10.-Travel Day, Helsinki-Tokyo
We left for the airport in the afternoon so there was enough time to get proper sleep which always is nice.I used my flightmiles to upgrade my ticket to business class for the first time ever. That of course was totally awsome.....the grass was greener and I managed to sleep for quite some time on the plane as well.

Friday 26.10. -Jetlag Day, Tokyo
We arrived in Tokyo just before 0800 in the morning. The catch is to try to stay awake the whole day and thus get right into the correct rythm. So, during the day we went to some music stores, mainly ESP guitar related ones....I guess it was ok but a bit on the boring side... Dinner and a stop at the grocery stores where also on the to do list. Later a party-patrol went to Roppongi and ended up at the Lexington Queen (actually the name has changed to Lex-bar or something like that). Sometime around 0200 it was time to get back to the Hilton Tokyo hotel and sleep.

Saturday 27.10.- Loud Park, Tokyo
Again a chance to sleep long, except for the fact that since your biological clock is totally fucked up so I woke up several times during the early morning hours. Finally around noon it was time to get up but of course I was dead tired by that time. It's funny how these jetlag-fixing-scemes never work out no matter how hard you try :-)  Nevertheless we went to the festival, met up with label people, promoters, merch people and a whole bunch of familiar faces. At 1640 it was our time to fire it up for a 60min festival show. We naturally had a blast and afterwards we did a quick signing session before we had the time to catch up with our friends from Dragonforce. Checked out some songs from COB and talked to a million people it seemed. When we got back to the hotel it was time for dinner and drinks, once again. 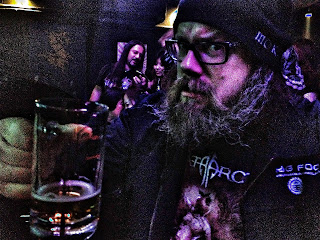 Sunday 28.10.-Travel Day, Tokyo-Helsinki-Kemi
So up at 0800, far to early for a change :-) Pretty much straight from the hotel to the airport and a few quick beers with the COB guys before we invaded the aircraft. No business class this time but I still slept some good hours. Back in Helsinki we had a nice 5 hour wait for the late flight to Kemi and home. This trip was a quite exhausting one but enjoyable nevertheless. Of course when you're away for almost a week and just get to play 60min it feels a bit crazy.

On Friday we're leaving for the European Tour so we have 4 whole days at home to try to get into some reasonable sleeping pattern before we leave again. I doubt it works but it is what it is and as long as everything goes well, our next show is on Saturday in Poland. Until then......silence.

The couple of pics used in this post are the only ones we could use since the rest of the pics were a bit.....hmm....off the charts, so to speak.