Hola,
Nothing got lost in the black hole !!!! Hell yeah, so I'm proven wrong once again :-)  We hit some bars
in Helsinki and hung out with a bunch of people. The next morning was a bit hard but somehow we got on the flight to Paris and from there to Mexico City. Upon arrival we took a bunch of pics and signed some stuff, I wonder how people find out which flights we are using ? At the hotel we had a quick dinner before heading to bed, which of course was a huge mistake...I passed out around 2100 and woke up just after 0300 in the morning. Got some breakfast with Tommy and Marko (who for some reason just arrived to the hotel at around 0600 in the morning)....later I went back to my room and took a short nap...and now i woke up again, feeling hungry again...gotta order something from the room service, or check if someone would grab some lunch with me. See you all at the show tonight !!! 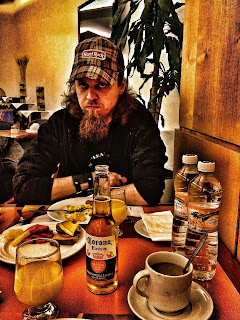 The first breakfast of this trip, it was very good indeed :-)