Hola,
So the show in MC was really great, you're always a bit nervous after some weeks off but appeareantly
we still know how to play our songs so no worries there....and as usual our Mexican fans came through and made a party of it so, thanks guys this was amazing. Later me & Marko (as usual) hit a local bar which was a bit interesting...it was called the bulldog and it was packed. Somehow we got ourselves back to the hotel alive and I even hit the breakfast buffet with Tommy before going to sleep. When I got up I spent the day hanging out with Tommy and Elias watching stupid stuff on youtube and....having a couple of drinks, Some of the dudes who woke up went to check out some pyramids or something...I'm sure you'll see it in Tonys tourvideos :-) At the moment I'm hanging out in the lounge at the airport waiting for our flight to Costa Rica. It's our first time there so it will be really interesting to see what's going on and how the coutry is. I'm sure it'll be great....just trying to watch the Rangers game but the internet is not too good so it's not really working out....we'll I'm confident that they can beat Buffalo without me watching....would be nice to enjoy the game but whatta hell...that's life...got some stupid pics again so enjoy and I'll be back. 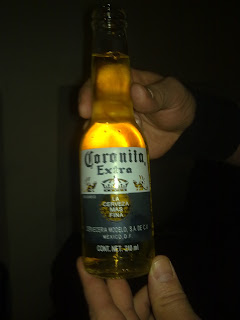 Backstage in Mexico: This is the first time I've seen one of these small Coronita bottles. Amazing
totally amazing...and it tastes just as good as the normal sized ones.... 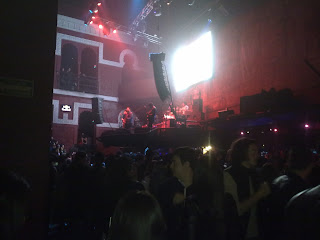 Some local band @the bulldog, or at least I think they were local but I have no idea, could have been a  band from Finland as well....you never know.... 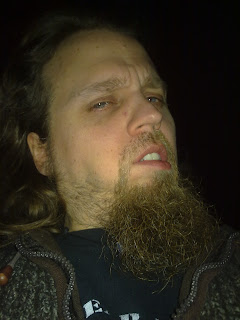 Self-Portrait during the show @ the bulldos, as you can see I was a bit sceptical about the whole thing. 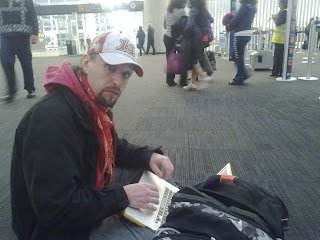 Waiting to do the check-in at the airport in Mexico City.....Tony didn't want to be in the picture but I got him....BooYa !!